The car was considered lost without a trace for almost 60 years until a mysterious call was received. Two collectors had come across the oldest Porsche 356 produced in Germany to still exist. And how they salvaged it is a story fit for the big screen.

When the music takes a dramatic turn, the camera shots change in increasingly quick succession, and the story line escalates to a seemingly hopeless situation at a breathtaking pace, everything points to a last-minute rescue. We are all familiar with this from action movies. But in real life?

This is a true story. And it was so dramatic in parts that it could have been made for the big screen. The 71-year-old lead goes by the name of Porsche 356 and is a 20th century automotive treasure. It was almost lost for good – but then came that last-minute rescue.

It is fall 2021. Thomas König and Oliver Schmidt, founders of the Automuseum Prototyp in Hamburg, are traveling the first few kilometers in the newly restored latest addition to their collection. It is an almost solemn occasion. The two Porsche enthusiasts had to wait almost eight years for this moment. “I never expected any of this in my wildest dreams,” says König, who gingerly drives the historic car with a 40 PS engine down a country road. Schmidt, who is sitting in the passenger seat, adds: “We thought we already owned the oldest Porsche 356 made in Stuttgart, but then number 5006 fell into our hands practically on our doorstep.” Number 5006 is truly a unique model, not only due to its bright-red metallic paintwork, which was unusual back then. The four-digit chassis number suggests it is one of the earliest Porsche models to be produced in Stuttgart in 1950. Its whereabouts remained a mystery for decades.

Seven Porsche 356 cars were built in Stuttgart up to the end of May 1950. The brand name made up of individual letters and the “banjo” steering wheel manufactured by VDM and featuring a horn button were characteristic. The sheet metal tubs under the rear seats bear witness to the handcraftsmanship, as does the border around the ivory-colored dummy insert in place of a radio.

Its rescue story begins in January 2013 when König and Schmidt receive a phone call. The caller begins by inquiring whether it is true that the oldest Porsche 356 produced in Germany and still in existence, number 5047, is on display in Hamburg. Upon this being confirmed, the man cuts to the chase – he claims to have an older model bearing chassis number 5006. And he is willing to sell.

The Automuseum Prototyp in Hamburg has had partnership ties with the Porsche Museum in Stuttgart-Zuffenhausen for some time. Its two founders have spent decades collecting, focusing in particular on early Porsche constructions. “We were instantly electrified – but also skeptical,” Schmidt reminisces. “Many calls like that lead only to disappointment.”

Their skepticism evaporates when the first photos arrive. One of them shows the four digits 5006 hammered into the sheet metal, while another features a weathered data plate – likewise bearing the number 5006 – alongside red paint residues. It would appear that the car is outdoors, more or less covered by a tarpaulin. It hasn’t had it easy.

Research conducted with the assistance of the Porsche company archives and external specialists determines that this really is one of the first seven Porsche sports cars to roll off the production line in Stuttgart up to the end of May 1950. König and Schmidt arrange an initial meeting with the caller, whose identity they still do not know, at a rest stop on the A1 freeway between Hamburg and Bremen. “The drive there was a little surreal,” says König, looking back. “We felt like we were in an episode of Candid Camera. Was somebody taking us for a ride?”

But the offer appears to be genuine. Before they can even view the mysterious object, a handwritten purchase agreement is drawn up at the freeway rest stop. And then the journey continues to a property just outside Bremen.

The site is right by a country road. Buildings, trees, bushes, and fences protect it from prying eyes. The owner, a friendly elderly gentleman, leads the two enthusiasts through a maze of sheds and into the labyrinthine garden, where there are roughly 20 historic cars scattered around, some under tarpaulins, others taken over by nature. A court order says this private car cemetery has to go. A household clearance company has already been contracted. In the midst of this jungle, the group is now standing in reverence in front of the treasure that has brought them together. “It was pure magic,” König enthuses. “It was as if 5006 had survived from a bygone age.”

In 1950, Porsche and the bodywork company Stuttgarter Karosseriewerk Reutter & Co. were under immense time pressure. The premiere of the first Porsche 356 from Stuttgart was highly anticipated. Financially, the two companies could not afford any delays. Materials and parts were in short supply and the production process was almost entirely manual.

The first Porsche manufactured in Germany was completed on April 6. This 356 Coupé with chassis number 5002 and lovingly named Greyhound for its light-grey color remained under the company’s ownership. It was used for test-drives and promotional shots and was subsequently destroyed in an accident. Number 5001 had actually been earmarked for a Cabriolet, which was however only built after chassis number 5002. Even today, chassis numbers do not necessarily tell us the order of production.

The first 356 Coupé from Stuttgart to be delivered to a customer went to the 43-year-old Stuttgart psychiatrist Ottomar Domnick, who was also a well-known screenplay writer and art collector. It bore chassis number 5005. Domnick traveled as far as North Africa in it and reported on his travels in the first issue of Christophorus in 1952.

Number 5006 remained in Porsche’s possession until September 1950, when it was sold to a private customer in the Black Forest. There is just a single reference to the car’s life from this point in the factory’s old records – in 1956, the word “engine” is noted in the warranties column alongside the name of a Porsche dealer in Bremen. The trail then goes cold.

Until 2013. König and Schmidt’s first inspection reveals that the car is in surprisingly good condition considering it was parked in the garden for decades. The owner had fortunately stored most of the add-ons in a dry shed and had conserved the body with a thick layer of oil.

The two men from Hamburg first check the chassis number. It is clearly legible. And in concealed places, there are more sizable remnants of the original metallic red paintwork. Another sensation – upon closer examination of the parts, it comes to light that fragments of the original engine have even survived. “Our doubts were definitively put to rest,” says Oliver Schmidt, “but we could still barely believe our luck.”

Salvaging the car proved to be the trickiest part of this journey back in time. The original approach road to the site was blocked by various buildings which had been put up over the years. There was no other means of approach – just a deep ditch right alongside the site. Using a historic mobile crane, the Prototyp team succeeded in airlifting the fragile body, which they had reinforced with a substructure.

2,500 hours were spent alone on thoroughly reconditioning the decayed body. The major objective – to preserve as much of the original materials as possible. Irrevocably destroyed components were painstakingly handcrafted.

The rebirth of the 5006 proves to be extremely complex. The aim is to preserve as much of the original materials as possible. The entire body is therefore carefully reconditioned. Where rust has been particularly merciless, the metal sheets have to be reproduced by hand – true to the original design of the historic model. “With these very early models in particular,” explains Thomas König, “virtually all of the sheet metal parts were shaped by hand.”

The oldest Porsche from Stuttgart that we know of now has a permanent place in the Hamburg museum. “For us, the 5006 is the high point of our work to date,” says König. The car also represents an important milestone in early sports car production under the Porsche name. A story fit for the big screen, with a happy end.

“I never expected this in my wildest dreams. It was pure magic.”

The new Porsche 356 from Stuttgart was first presented to the general public at the auto show held in Reutlingen in May 1950. The company Reutter showcased the car at the stand of the Max Moritz car dealership. In addition, the company Lechler highlighted its special Durapon paintwork that gave the Coupé a glossy metallic red look, as shown in a photo of the trade show stand. It is believed to be the oldest color photo featuring a Porsche 356 – precisely the car that was rediscovered under a tarpaulin outside of Bremen 63 years later and whose story is told here.

1,086 cubic centimeters of displacement in the first four-cylinder boxer engines of the Porsche 356.
40 PS delivered a sporty driving performance, which was further boosted by the relatively low weight.
770 kilograms of total weight were the result of systematic lightweight construction already back then. 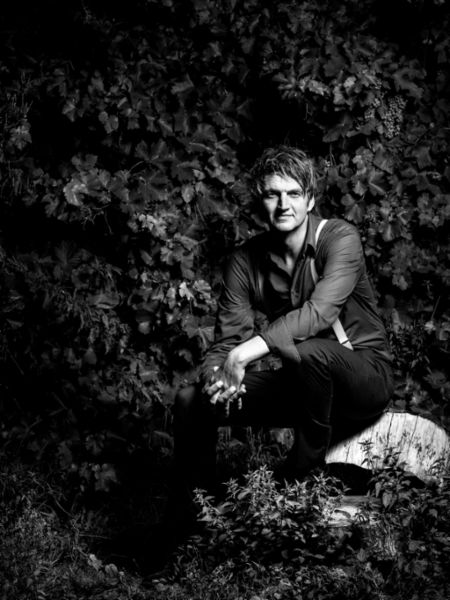 Birth of a Quality Seal

Today, the Porsche crest is one of the most popular trademarks in the world. Since 1952, it has adorned every sports car from Zuffenhausen. But how did the idea for it come about? The traces lead back to New York City in the early 1950s.

ICON: 4.5 Kilometers per Hour for All Eternity

At first it was criticized, today it’s legendary: the rear of the 911 Carrera RS 2.7 – known as the ducktail – has become an iconic part of the 911, allowing for huge performance leaps.

The 911 Carrera RS 2.7 once celebrated its world premiere in Paris – now we meet a special model in southern France on the occasion of its 50th anniversary: chassis number 0027. The owner is works driver André Lotterer.