What do a watch and Porsche sports car engineering have in common? The Monobloc Actuator from Porsche Design Timepieces has the answer.

A man sits alone at a workbench. Before him lies an array of tweezers and miniature screwdrivers. Gazing through a jeweler’s loupe, he assembles a watch movement and sets it into a casing. This is the classic image of watchmaking that has etched itself into our minds. And this is in fact exactly what happens in many places.

At Porsche Design Timepieces, specialists also meticulously give watches their final touches. But before reaching that point, the company’s approach differs from that of a traditional workshop. Since opening in the Swiss town of Solothurn in 2014, its model has been Porsche AG—both the Development Center in Weissach and the production facilities in Zuffenhausen. That shouldn’t come as a surprise. After all, some of the key people at Porsche Design Timepieces have the Porsche philosophy running through their veins, like managing director Rolf Bergmann. After earning a degree in production engineering, he worked as a production manager in Zuffenhausen for many years.

Flexibility in production plays a key role in Zuffenhausen. Carreras, Turbos, coupes, Targas, or convertibles may be moving along the assembly line in no particular sequence—and the requisite parts are always ready for assembly at the right time and in the right place. Bergmann has adopted this system for use in watch manufacturing as well. And furthermore, because he works with flexible suppliers who also operate on a just-in-time basis, limited-edition series can easily be produced—including personalized, one-of-a-kind pieces. The first Porsche Club orders for limited-edition watch series have already been placed.

The Solothurn-based company might still be young, but Porsche Design has a long tradition of making watches. The latter was founded by Professor Ferdinand Alexander Porsche, who gave the 911 the unmistakable lines that mark it to this day. After starting his design studio in Stuttgart in 1972, he presented his first self-designed watch the very next year. It was entirely matte black except for the hands and indexes. “My intention was to create a timepiece that would match the car. Black, like the speedometer and tachometer of the 911, because that would eliminate the glare.” Another milestone was the titanium chronograph from the 1980s. It has a legendary design with pushers sunk into the casing, but it’s especially famous for being the first chronograph to be made out of titanium. Porsche Design Timepieces continues in this tradition: its watches are made of the same material.

But what should the signature product from Solothurn look like? The young company turned to the studio in Zell am See for inspiration, where Roland Heiler carries on the legacy of F. A. Porsche. The Swabian designer didn’t want a simple replica of an old success story, but was instead interested in a modern interpretation. The new timepiece grew in diameter, while edges now accentuate its once rounded lines. The right flank of the casing in particular needed to become “cleaner,” which is why Heiler chose chronograph kinetics with a rocker switch. This component is responsible for the stop mechanism: start, stop, zero. 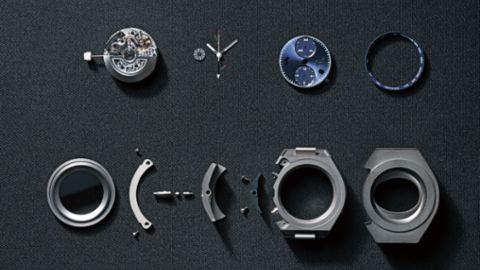 This was a straightforward matter for the designers but a tricky proposition for the constructors. “A simple axial bearing for the rocker switch was out of the question, because the axis would have intersected with the crown tube,” explains Bergmann. So the casing makers initially suggested a one-sided bearing. But this would have required a designated pressure point, and the rocker switch was also supposed to be flush with the casing and without any play when inactive. That’s not feasible for a one-sided bearing with these dimensions. “In situations like this, I like to pick up the phone and call Weissach,” says Bergmann with a mischievous smile. He was told that engine components subject to high mechanical loads always have double-sided bearings. On his request, Weissach proceeded to come up with an alternative construction. “I took it to our casing maker, and we quickly agreed that this was the better design,” recalls Bergmann. The solution created jointly by the racing and watchmaking specialists has now been patented. It resembles a rocker-arm system for controlling valves, although the rocker switch doesn’t operate valves. Instead, it operates studs that transmit the pressure of the wearer’s finger to the chronograph’s mechanics. A spring mechanism—analogous to a valve spring—returns the rocker switch to its neutral position. Seals on the shafts ensure that no water enters the casing.

The Swiss Chronofiable standard stipulates that chronographs have to survive at least three thousand operations. “But we followed the Porsche principle, which says that a product has to withstand considerably more than what’s in the regulations,” says Bergmann. “So we based our entire development process, including all the quality assurance measures, on the Porsche development process.” The watches have to be robust and suitable for everyday use, which is why the sapphire crystal has sevenfold anti-glare properties on both sides and is scratchproof. The rocker switch itself presents no danger to the crystal. Its movement is so precise and the production tolerances so strict that the switch moves across the crystal without touching it, as if on a cushion of air.

Anti-glare and perfectly readable — F. A. Porsche would be pleased.

The makers of Porsche Design timepieces have named this line of chronographs the Monobloc Actuator. The latest member of the series is christened Black & Rubber. Its titanium casing has a black matte coating, and its band consists of black rubber. The dial is anti-glare and perfectly readable. F. A. Porsche would be pleased. 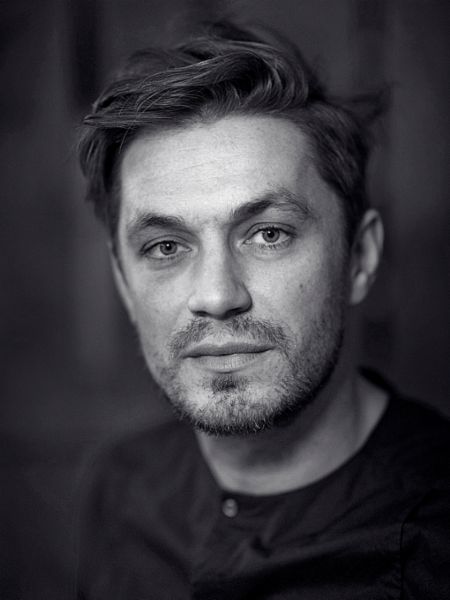